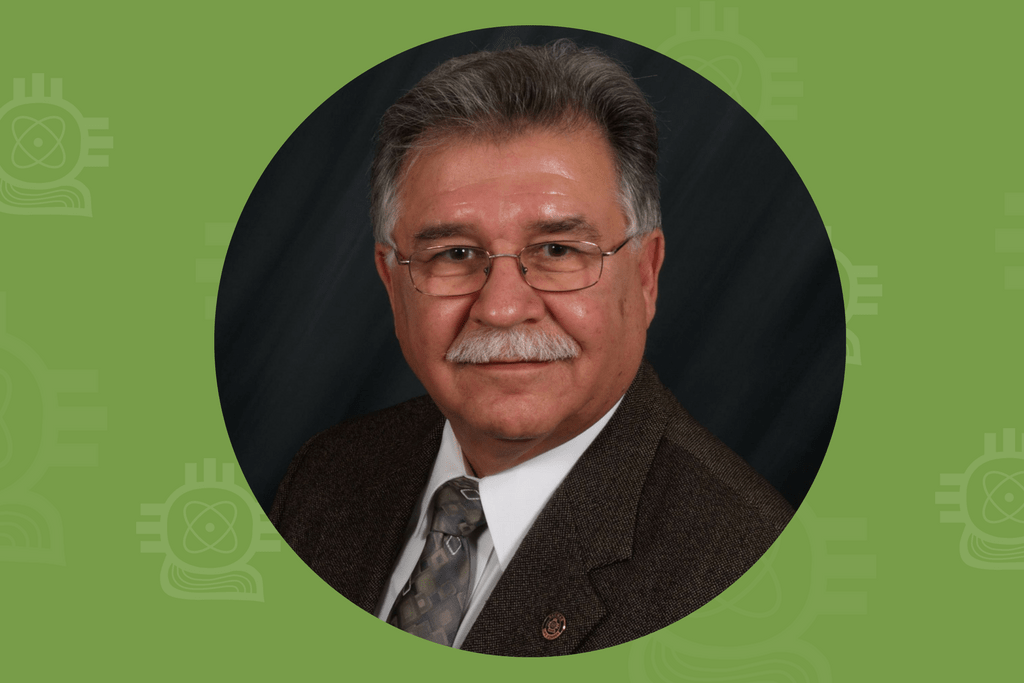 “We work tirelessly to create the notes that are this complex composition of mathematics, yet we spend little time thinking of how to sing, and even less time recruiting for singers of this composition. Don’t you think that the music would be sweeter if more of us had a chance to sing?” –Dr. William Yslas Vèlez on the need to increase math literacy among minority populations. (Source: MLK Visiting Professors & Scholars Program)

SACNAS celebrates the career and contributions of Dr. William Yslas Vèlez upon his retirement as Distinguished Professor of Mathematics at the University of Arizona (UA). Vèlez, a founding member of SACNAS and President from 1994 – 1996, served UA for 40 years.

Throughout his entire career, Vèlez has worked tirelessly as both a composer of mathematics and a mentor to emerging “singers.” A distinguished number theorist specializing in algebraic number theory, he was named a Fellow of the American Association for the Advancement of Science. As a distinguished mentor, Vèlez received the Presidential Award for Excellence in Science, Mathematics and Engineering Mentoring from Bill Clinton in 1997. As SACNAS president, Vèlez secured significant funding for the organization during a period of exponential growth and started the SACNAS Biography Project, now the largest online archive of information about Chicano/Hispanic and Native American scientists.

At the University of Arizona, Vèlez led the UA Math Center for the last 14 years. Under his leadership, Vèlez increased the number of UA math majors from 250 to over 650, largely by encouraging students to just take “one more math course.” Today, UA has the largest number of math majors in the southwestern United States and in 2017, awarded over 30 BS degrees to minority students, the largest number in the institution’s history.

Two current members of the SACNAS Board of Directors are part of Dr. Vèlez’s legacy of mentorship with his signature warmth and vivacity. Dr. Erika Camacho, Associate Professor of Mathematics at Arizona State University and Dr. Cristina Villalobos, Professor of Mathematics at the University of Texas Rio Grande Valley, both met Dr. Vèlez as undergraduate students at SACNAS conferences in the 1990s.

For Villalobos, it was the 1994 SACNAS conference in Chicago. An art lover, she was planning a side trip to the Art Institute and mentioned it to Vèlez in their first conversation at a networking event.  He offered to join her and they spent the afternoon conversing and enjoying art. That first encounter turned into a long mentoring relationship. She says, “He has mentored me in my career by providing me with opportunities to serve on professional committees at the national level and in mathematics and we’ve had many conversations over the state of mathematics education and on how to increase the number of mathematics majors, for which he has been very successful at!”

Dr. Erika Camacho recalls that Vèlez was one of the few and first Latino mathematicians she had ever met and interacted with. “I witnessed his commitment to promoting Latinos, mathematics, and diversity as he spent numerous hours proofreading my statement of purpose, giving me feedback, and academic advice.” Camacho says that as she has progressed from student to professor, she continued to witness this same dedication and passion for diversifying the mathematical sciences and higher education. “Through my work with him in the Math Alliance and most recently in the Park City Math Institute Diversity committee, it is clear that he is a leader and champion for diversity. His contributions have changed the mathematical sciences for the better.”

Help celebrate the legacy of SACNISTA Dr. William Yslas Vèlez by contributing to the W.Y. Velez Emerging Mathematicians Legacy Endowment Fund at the University of Arizona which aims to benefit math majors through scholarships, conference travel money, and achievement awards.

Dr. Vèlez, SACNAS thanks you for your profound contributions to the STEM diversity movement.